The United States is home to the world’s most important wine market. But how many domestic wineries annually produce wine within the USA?

A recent study from Wines & Vines magazine tabulated the results and found that there are 8,391 wineries in North America, with 7,762 of those located in the United States, 568 of those located in Canada (primarily British Columbia and Ontario) and 61 in Mexico.

And the number of wineries in North America continues to grow at an impressive annual rate. Every year, the number of U.S. wineries increases by just over 4%. And, even more impressively, U.S. wine production is actually growing at an even faster pace of 6.3%. Thus, not only are there more overall wineries in the USA, but also these wineries are producing more wine than ever before.

It’s perhaps no surprise that California is the leading state in the nation in terms of wine production, with 3,674 wineries. That’s approximately half (47%) of all wineries in the United States, led by key wine producing regions such as Napa and Sonoma. 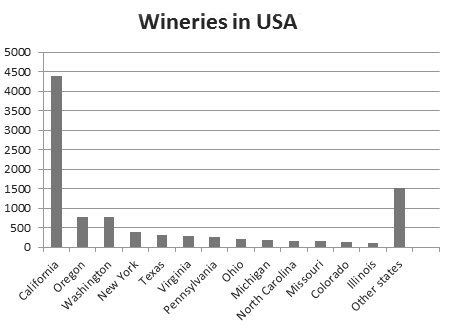 What’s particularly interesting about these figures is that they show the truly continental dispersion of America’s wineries. There are now important wineries in just about every state. The two fastest-growing wine regions in the United States are located in places you might not expect. The Mid-Atlantic seaboard, comprising states such as Maryland (+11.1% growth) and Pennsylvania (+4.8% growth), is one area of expansion. Another area of expansion includes Western states such as Arizona (+14.3% growth) and Colorado (+7.1% growth),

Of course, the largest wineries are still located in California. These are the wineries that are responsible for many of the wines that you’ll find on the retail shelves of your local wine store. As a general rule of thumb, California wineries account for 40-50% of total wineries in the United States, but close to 60% of all production. This can be explained by the presence of truly large-scale wineries across California.

By way of comparison, only 56 wineries can be considered “large” wineries with annual production of more than 500,000 cases. And only 223 wineries can be considered “medium” wineries with annual production of anywhere from 50,000 to 499,999 cases per year. That means most of California’s wine production still comes from small, very small, and micro-sized wineries. The most popular size category, in fact, is “very small,” with 3,189 wineries.

And, there is one other factor to consider – and that is the growth of “virtual” wineries that have their own branding and packaging, but that produce wine at a host facility. They do not own brick-and-mortar premises. Of the 8,391 wineries, nearly 1,200 of them are virtual (and not bonded) wineries.

In 2018, California still ranks as America’s most important wine-producing state. But as evidenced by the expansion in Washington, Oregon and Western states such as Colorado and Arizona, it is clear that American winemaking expertise is being steadily diffused across the nation. If a regional climate is amenable to winemaking, you can assume that you’ll find adventurous winemakers there, creating quality wines.

Source of the Statistics: Wines & Vines

Enter Today and Grow Your Brand In USA Market. Here is How to Enter.